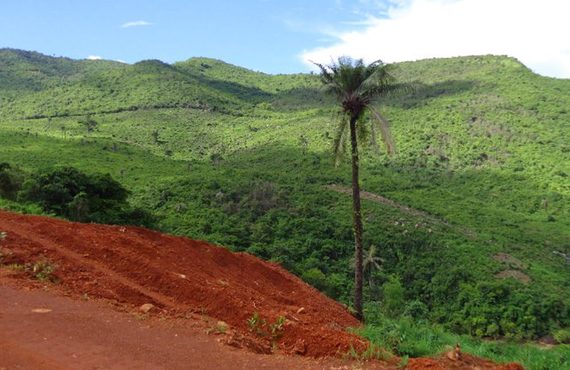 GEOMORPHOLOGICAL CONDITIONS OF THE LICENSE AREA

Geomorphological conditions of the license area are quite homogenous. There are two landscape districts; the central and north-western districts. In the central district, there are uplands with prevailing phototone of pink-red shades, (see Figure 5 and Figure 4). This allows you to presume that the district consists of granite complex rocks.

The prevailing heights are 300-400 meters and the tones corresponding to flora are light-green in the multispectral space images. The North-western district was created due to the presumed faulting disjunctive deformations of the north-western fall. It is featured by elevation depression up to the prevailing heights of 150-250 meters and by changing the main phototone in the multispectral space images by brown-grey, up to dark-grey. The tones corresponding to flora, as compared to the central district, change by dirty green and grey-green tones. The author considers that changes in the phototone show changes in rock complexities forming the district and causing soil formation with another compound, flora and other joint conditions in which the landscape has been created.

Fluvial flows in the area are mainly linear which show tectonic genesis. Thalweg fall has mainly northern and southern rhombs from the central water division following the curve from the north-western to the eastern area segment.

This water division creates two local water basins; the northern and southern water basins with the latter having a quite smaller space. Within the northern basin there are basins of the rivers; the Makuranko, the Makoungi, the Matiri and the Gbonkobon (see Figure 11) located from the west to the east with the corresponding basin area decreasing in the same direction. The Makuranko, the Makoungi, the Matiri have symmetric valleys within the area; the Matiri has asymmetric valley features with the prevailing tributary formation in the western slope and almost without them in the eastern part of the valley. The Gbonkobon is partially represented within the area by three 1storder tributaries and is not involved in the surface formation. All the rivers of the northern basin flow into the Mongo River closely to the northern border of the area, with a distance straddling of about 500 meters to 5 kilometers.

Within the northern basin there are basins of the rivers the Mabokotona and the Matui (see Figure 11) of the 2nd – 3rd order of classification by Strahler. The Mabokotona is featured by changing the stream bed flow in the south-western part related to the crossing point of north- eastern and north-western rift zones which caused in effects, its stream bed formation. Low course of the Mabokotona controls geomorphological conditions of almost the whole western border of the licensed area. The Mabokotona, like all the rivers of the northern basin, flows to the Mongo (6th order) at the distance of nearly 2 kilometers from the north-western edge of the licensed area. Stream bed of the Matui located in the south-eastern part of the licensed area was completely formed due to the 2nd order radial lineament which corresponds presumably to the north-north-eastern rift starting from the circular structure core in the Madala district described below. Within the area the river basin is formed by the 2nd – 3rd order elements (by Strahler) influenced by radial and concentric rifts being the components of the regional circular structure and the Mabole estuaries make up nearly 100 km.

The elements are located at the angle of nearly 900 towards each other. The Mabole flows into the Little Scarcies (Kaba) and it intricate the creation of the Mabole basin of the higher rank (3rd – 5th order), left tributary of the latter one. The distance between the Mongo In order to analyze neotectonical activity of the licensed area according to the V.M. Filosofov’s methods, the following up two surfaces were interpreted; basic and hilltop ones. Basic surface is created under the basic Thalweg marks of the fluvial network elements (see Figure 11). The height range of the basic surface varies from 88 to 360 meters. Graphical supplement shows that erosion basis mainly decreases from the eastern segment to the west due to neotectonical peculiarities of the area described below and the fundamental rock compound subject to erosion.