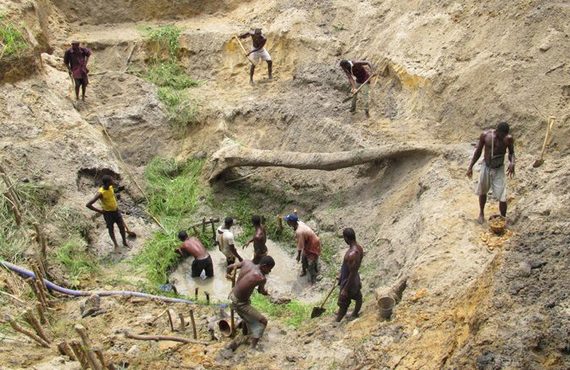 NEOTECTONIC CONDITIONS OF THE LICENSE AREA

Morphological structure consists of interchanging radial and concentric elements forming a so-called web. Neotectonic conditions of the study area are trending to the incremental vertical movement with positive stretching value. The area is completely located within the morphological structure (centralized type) with the core near the settlement of Madala.

Morphological structure consists of interchanging radial and concentric elements forming a so-called web. The area is limited by two 1st order radial elements marked in the corresponding graphical supplements as L101 and L103 (see Figure 11). Radial lineaments are represented by two rays dispersed from the same center, marked in the graphical supplements as R101, R102, R201, R202, R203. Lineaments R101, R102, R201 are expressed in surface structure by rectified stream beds (fluvial flows) without visible vertical shifting and are probably the gapping cracks. Radial lineaments R202, R203 continue externally the lineament R201 starting from the concentric element K03. They form the rift- like structure which controls development of the upper value of the Mabokotona.

Concentric elements consist of three circular segments which change each other concentrically towards south-west: K01, K02, K03. In surface structure, they are reflected by interchanging arc elements of water-dividing the valley areas and do not have clear neotectonical morphology. Maybe, they create the low-amplitude thrust system of the south-western fall within the licensed area.

In the western part of the license area, they are decoded (by several features), two rifts crossing each other at the right angle: L201 (sub meridional) added by L202, L203 and LS01 (sub latitudinal). The sub meridional rift is probably fault-like towards the west, the sub latitudinal rift has unclear morphological structure

Figure 2: Visualizes the Map of Elementary Basins in the Licensed Area with Vertical Neotectonic Movement

The rift crossing point is the central part of the concentric rift which consists of 2-3 components. Almost one-third of the north-western segment of the licensed area has fault-like structure following along the system of north- eastern arc and linear elements (probably recently deposited). This structure has other phototone, radically different from the rest of the area, which shows difference between earth materials being the components of these areas. The conclusion is based on the fact that crystalline rocks are faced almost within the whole space of the area. There is no sedimentary cover or it is represented by small alluvium deposits. The western part of the licensed area is traced by the 2nd order lineament which corresponds by several features to the same rift which creates the northern rift-like structure. This rift goes to the north-north-east and is not contrasted in the scope of works. Vertical shift amplitudes within the elementary basins make up from 67 to 401 meters(see Figure 12). Such value shows neotectonic conditions of forming each elementary basin, intensity of erosion processes within the latter one which saw the fundamental source position against the erosion basis and its erodibility rate.